It was inevitable that we would do something with Elvis at some point. We have so many negative opinions on Elvis it pulsates from us. We see Elvis as an entertainer and nothing more.

That’s not to say we at Asinine Radio don’t appreciate what he did for music. However, if it weren’t him it would have been someone else. 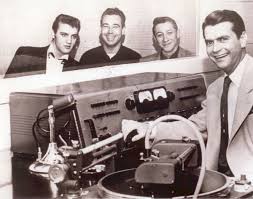 We decided to get into the first stuff Elvis really did and recorded to see if it was more bluesy than the silly shit we normally hear people play. The Sun Sessions have some interesting history and its a fun topic to get into, but you’ll hafta listen to the episode. The Sun Sessions did impress me in that it wasn’t total shit. There was some good stuff there that genuinely surprised me. You could hear the early rock music. You could hear the rockabilly and you could just picture the first quintessential rock star.

Elvis didn’t write music. He barely played guitar, couldn’t sing very well, and relied so heavily on his backup band that it’s silly to call him anything less than an entertainer. Not even just an entertainer but a record label, manufactured entertainer who probably never made any kind of career decision in his life.

Elvis was influential. Times 1000. I get it. But let’s leave it at that and move on from his music forever. Plz.