This week’s review is of one helluva pop punk band from our northern neighbours in Canada! Oh Joy! Prior to Chuck, Sum 41 was already established on the radio and on television and extremely popular. Chuck, however, was a pretty cool departure from the immaturity and sillyness we came to love which they drew more influence from the heavy metal genre. 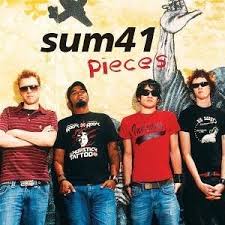 Chuck dropped and hit us with some really cool tracks that were both deep in tone as well as the music itself. Some more adult and tougher themes come through in the lyrics and we see a side of the band not previously seen.

The first third of the album is relentless in its powerhouse of tracks. Unfortunately, the momentum sort of hits a lull toward the middle and kind of bleeds into the second and third part. This isn’t my favourite Sum 41 album but it’s a must listen for any fan of these boys. This is also the last album to feature their lead guitarist Dave Baksh, although he would return for much later albums.

There’s a little back story to the name of the album and where it came from that is actually pretty interesting. You could look it up like a chump or you could just listen to our podcast for the answer. So much easier!

We’re All To Blame, No Reason,  Angels With Dirty Faces