My pick this week came from…well, I don’t even remember. My mom used to listen to these guys when I was a kid and I’ve always liked the Destroyers. Definitely a blues rock group that does both genres total justice.

Everyone probably knows The Destroyers for their song Bad To The Bone. What most people may not know is the bluesy, sentimental feeling of their self titled first album. George Thorogood may be a rock god but being grounded by bluesy riffs and love struck lyrics round out a man that can only be described as legendary. 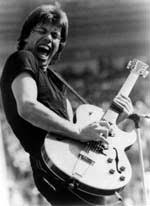 Their self titled album is filled with covers ranging from Earl Hooker to Robert Johnson. Some really inspirational blues artists, nay, legendary blues artists. This album puts the blues upfront and doesn’t hide it behind a heavy rock sound, such as the Rolling Stones in some cases. The Destroyers embrace the heart ache that normally accompany blues songs and add some 70’s rock to it.

Songs like Kind Hearted Woman show us that Thorogood can dig deep within and break the mold as a hard rocker and add some emotion to the genre. On the other hand, One Bourbon, One Scotch, One Beer, show us that these guys can rock.

If you dig blues music, or music that helped defined a generation then check this album out. It’s worth it.