I think this is the first time in over 100 episodes we’ve done a compilation album! Wowzerz!

But for realz, when your talking compilation albums there is no match next to the first 7 Punk O Ramas. Fact. But this week we’re diving into Punk O Rama 6, which came out in 2001. This was the first Punk O Rama series I purchased and arguably thrust me into the music world! Such history!

If you are unfamiliar with the Punk O Rama series it was a compilation put out by Epitaph records to showcase their talent on their label. It sort of snowballed into a compilation powerhouse in the 90’s and eventually faded away when good music also died in the mid 00’s.

What separates this compilation, for me, were the unreleased / hard to find tracks that accompanied this album. The NOFX song “Bath Of Resistance” was eventually released on a b-side compilation buried in like 40 songs, some good and some bad. Another gem is the Pennywise track “We’re Desperate” featuring Exene from the Los Angeles based band X. The rough voice of Jim Lindberg mixed with the smooth punk highs of Exene make that track a must listen to any punk rock fan. 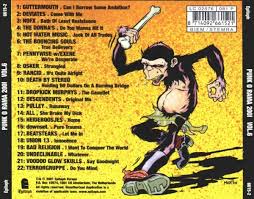 This album also holds a very nostalgic place in my heart as it was the first time I had of The Bouncing Souls. Since then, I have been a huge fan of the band and their music.

I wish labels still put out decent compilation albums to showcase their talent. Wonder why they don’t? Not enough talent?