Our album of the week is from a band so deeply loved by AsinineRadio, Guttermouth. Guttermouth, in my opinion, embodies all that is punk. Their personal style, their music, their live performances, everything about these guys (mostly Mark Adkins, the singer) screams punk to me. Specifically, “Musical Monkey.

“Musical Monkey” was released in 1997 and is the band’s fourth album. Guttermouth are known for their abrasive and offensive lyrics but some of the topics covered in “Musical Monkey” are almost too much. Almost. This is my personal favorite Guttermouth album. Front to back are songs that are fast, heavy, sarcastic, and just really funny. 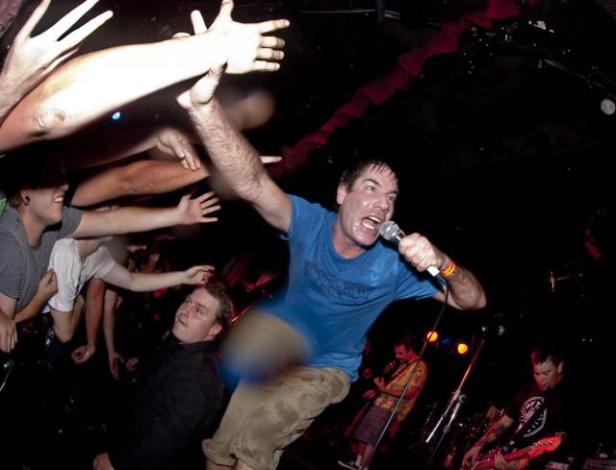 Lucky The Donkey tells the story of the narrator’s mother participating in a donkey show in Mexico for some quick money. The song is fairly descriptive yet hilarious. Perfect World shows us what it would be like to live in a perfect world, if it were up to Mark Adkins, I suppose. But what I think really separates this album, and this band, from others is their ability to make fun of some of rock’s greatest musicians.

The song, What If?, is a retelling of a world where Fred Schneider auditions for The Doors and makes a total ass of himself. Other tracks like When Hell Freezes Over give homage and poke fun at some of rocks “Gods”. The track itself is a poke at The Eagles while the lyrics make fun of Ozzy, Motley Crue, and Kiss, as well as gives a short, badass sample of Black Sabbath’s “Paranoid”.

Guttermouth’s ability to deliver punk music in such an offensive manner is the main reason these guys are one of my favorite bands. The sheer disgust and distaste for their music by some people is enough for me to sit back, laugh, and enjoy some “human – donkey fornication”, as Mark so eloquently puts it.

Do The Hustle, What If?, Lucky The Donkey