This week’s pick comes all the way from Italy. Specifically the Veneto region (northern Italy) from what I can gather online. Hard pressed to find an English page with some info. Anyway, forming in 2007 Rumatera became a fan favorite in the Italian pop-punk scene, not that I even know what that “scene” is. They’ve released 5 albums that have stayed pretty consistent to the genre. However, their latest album, “Awanti Coi Ammicci”, departs slightly from the traditional drumming normally associated with pop-punk by adding in a lot of electronic kits to create an electro pop-punk sound.

Rumatera’s first ablum, “My Crew”, is titled, labeled, and sung in English. The album is exactly what you’d expect from a pop-punk band. It’s melodic, catchy, light hearted, and energetic. After their first album they seem to embrace their roots and go back to singing in Italian, specifically a Venetian dialect, while still keeping up the pace of their debut album. They have a dual singing thing going with one being a typical nasally pop-punk kid and the other this deeper, guttural, voice. The guitar work reminds me of some stuff Matt Pryor/Jim Suptic did with the Get Up Kids.

What really took me in from this band was their live performances. Apparently, they are energetic AF. Like a hyperactive child gorging on ice cream. These guys put on a show complete with cheer leaders, a priest, and a dancing pig! They also employ “Lady Poison” who’s job is to spray the crowd with a cocktail of rum and pear juice. I mean c’mon, that’s rad. 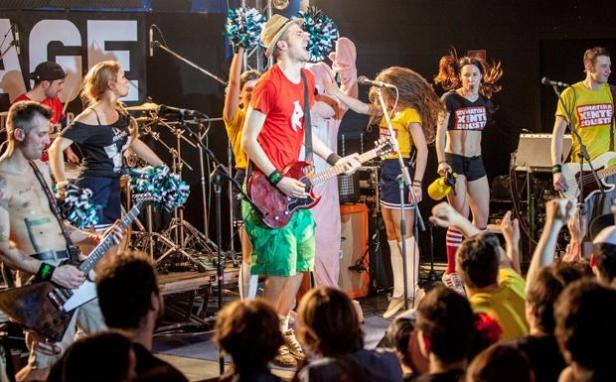 I enjoy pop-punk music and love going to shows of that genre even more. Just a good, upbeat, cohesive happiness type of vibe and I hope these guys come over here to play and goof off.